The co-op effort between Reaume Brothers Racing and GMS Racing will include technical and engineering support from the two-time championship winning team, pulling valuable resources and crew members from both entities while building teamwork with GMS Racing drivers Grant Enfinger and Jack Wood along with their respective teams.

Moffitt’s 2022 racing schedule will be kicked off in a big way at the season opening race at Daytona International Speedway, where the longtime Richard Petty partner STP will celebrate the 30th anniversary of Petty’s “Fan Appreciation Tour” with a paint scheme paying homage to the 1992 retirement season.

“I am super excited to make my NASCAR Camping World Truck Series debut at Daytona in the No. 43 Reaume Brothers Racing Chevrolet with team support from GMS Racing. Daytona is a track that has a lot of family history, and having STP onboard makes it that much more special. It truly is an honor to run the iconic STP branding on my Silverado along with my fire suit, and I am hoping to represent their longtime support of my family in a great way.” said Moffitt.

Since 2017, Moffitt has competed in forty-four ARCA Menards Series races while running for various teams. In that time, the twenty-one-year-old driver from Trinity, NC has posted a stout rep sheet with 25 top-10 finishes and eight top-fives, earning a best-career finish of third at Phoenix Raceway last season. Thad competed for the ARCA championship in 2021, ultimately finishing fourth in the series standings despite only running sixteen of the twenty races.

Daytona will mark an important career milestone for Moffitt, as he will attempt to make his NASCAR Camping World Truck Series debut with the No. 43 team. This debut will be only the fourth time in NASCAR national series history in which a fourth-generation driver will compete, making the occasion extra special for the Petty/Moffitt family.

RBR Team Owner Josh Reaume looks forward to bringing Thad on board, saying “I am thrilled to be able to partner with GMS and have their support; they are an extremely strong and highly respected organization that I have a great relationship with. Everyone at Reaume Brothers Racing is excited to work with Thad and have him make his Truck debut with us. Lastly, it’s an honor to play a role in helping continue the Petty Family racing tradition. Thad is a very talented young driver, and it will be fun to watch him grow and see where his career takes him.”

The paint scheme that Thad will drive will be instantly recognizable to diehard NASCAR fans of all ages, as it brings back memories from “The King”, Richard Petty. The iconic STP color scheme will be prominently featured on the truck in addition to a fire suit which resembles Petty’s from the 1992 Daytona 500 – Petty’s final start in the Great American Race.

“STP is proud to continue its partnership with the Petty family and join Richard’s grandson, Thad, for the NextEra Energy 250 NASCAR Camping World Truck Series race at Daytona International Speedway, ” said STP Senior Manager, North America Brand Activation, Craig Hamilton, “Thad’s debut with STP is an exciting moment for the brand and will mark the third-generation Petty that STP has partnered with in NASCAR. We’re proud to carry on the tradition, now in its 51st year, and we’re looking forward to seeing where Thad’s career takes him.”

Indeed, there’s no better way to honor the iconic STP/Petty relationship that dates back to 1972, one of the longest lasting marketing partnerships in all of sports. Ahead of the partnership announcement, Richard offered his enthusiastic remarks:

“Over the past 50 years STP has been with me very step of the way and I’ve been proud to support them. But this takes it to a whole new level for me. To have Thad racing with STP at Daytona, a place that our family has been so successful at, is just very special to me personally. Obviously, I’ve watched Thad’s career grow and he is ready for this next step in the Camping World Truck Series. It will be great to see another member of the Petty family racing with STP.” said Petty.

Moffitt will compete in a hybrid schedule in 2022 which will include the NASCAR Camping World Truck Series, ARCA Menards Series and Trans AM. Additional Details of Moffitt’s schedule along with further partnership announcements, will be forthcoming. Partnership opportunities are available for the No. 43 program – for all partnership inquiries please contact Stephen Moffitt via email at smoffitt@pettygms.com for more information.

The NASCAR Camping World Truck Series will begin its 28th season under the lights with the NextEra Energy 250 at Daytona International Speedway. For live coverage of the event, tune in to FOX Sports 1 at 7:00 PM ET as Thad Moffitt makes his debut with the No. 43 STP Chevrolet Silverado RST. 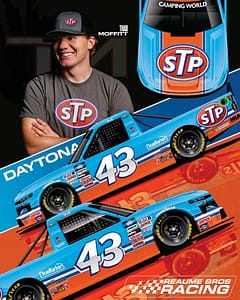 Energizer Holdings, Inc. (NYSE: ENR), headquartered in St. Louis, Missouri, is one of the world’s largest manufacturers and distributors of primary batteries, portable lights, and auto care appearance, performance, refrigerant, and fragrance products. Our portfolio of globally recognized brands include Energizer®, Armor All®, Eveready®, Rayovac®, STP®, Varta®, A/C Pro®, Refresh Your Car! ®, California Scents®, Driven®, Bahama & Co. ®, LEXOL®, Eagle One®, Nu Finish®, Scratch Doctor®, and Tuff Stuff®. As a global branded consumer products company, Energizer’s mission is to lead the charge to deliver value to our customers and consumers better than anyone else.

Reaume Brothers Racing is entering their fifth season in the NASCAR Camping World Truck Series fielding the No. 33 and No. 43 entries in 2022. The team is dedicated to providing unparalleled excellence and quality to our drivers, team members and partners. We are committed to building value by bringing and creating a culture of competitiveness, performance and teamwork. For more information, please visit www.reaumebrothersracing.com.