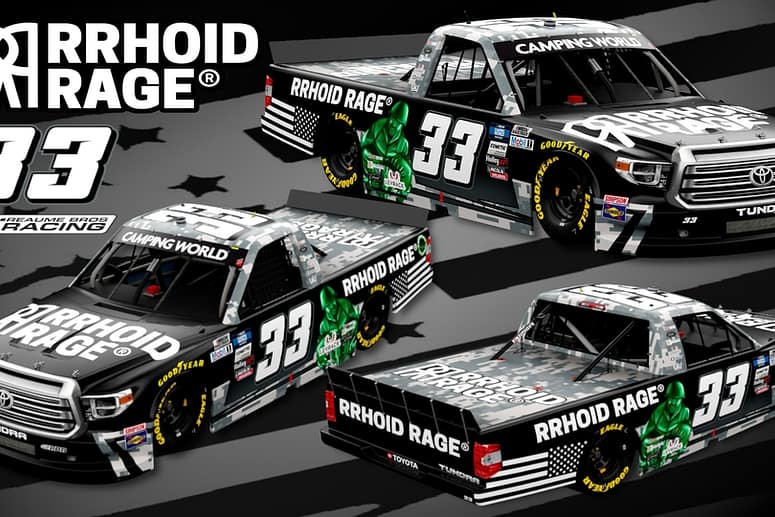 MOORESVILLE, NC: Reaume Brothers Racing is proud to announce that Rrhoid Rage will be the primary sponsor for Josh Reaume at Charlotte. The Texas based veteran owned company specializes in treating hemorrhoids.  Rrhoid Rage was founded by Trey Coleman, a combat veteran who has struggled with Hemorrhoids since his time in the U.S. Army. “I didn’t always have monstrous hemorrhoids. Growing up, I had no issues and my problems began during my time in the Army. Like most men, I just ignored the problem. I eventually had serious hemorrhoids. At a dinner with friends and family, the conversation somehow turned to hemorrhoids, and the idea was introduced to create a product called ‘Rrhoid Rage’. What was taken as a joke by everyone was taken seriously by myself, and with the help of my wife, brother-in-law, and sister-in-law, Rrhoid Rage was born. Hemorrhoids are not something to take lightly, and while I ended up having surgery due to the severity of the issue, you don’t have to with the help of Rrhoid Rage.”

Josh Reaume, owner of Reaume Brothers Racing, has seen the benefits of Rrhoid Rage firsthand, and understands the importance of a simple and efficient solution. “I am excited to be driving with Rrhoid Rage and not Road Rage. The veteran ownership that makes up Rrhoid Rage as an organization are unlike any other and have a lot of fun with a sensitive topic. I am thrilled to have Rrhoid Rage on board in Charlotte and I’m looking forward to a positive result. As an owner driver, I have enough pain in the ass, I don’t need to worry about anything additional!” As an owner and driver, Reaume has many things to tackle on a day-to-day basis and having hemorrhoids will only be a pain in the ass. With Rrhoid Rage, this will never happen with a numb ass.

Reaume Brothers Racing began in 1997 when brothers, Jonathan, and Joshua, started racing in competitive kart racing. From the humblest of beginnings to the NASCAR Xfinity/Camping World Truck Series, Reaume brothers have been chasing the racing dream, competing in events all around the world.

2022 will mark Josh and the teams’ fourth full season in the Camping World Truck Series fielding the #33 and #43 trucks and is proud to be the most diverse team in all of NASCAR’s three National touring series. Reaume Brothers Racing is dedicated to providing unparalleled excellence and quality to our Drivers, our Partners and our Team Members; by setting an elite standard of greatness and by executing our teams core values. Driven with passion and fueled with engineering, Reaume Brothers Racing is continuing to make a difference in NASCAR.

Josh Reaume was born in Redlands California in 1990. He grew up in Nigeria for 13 years before moving to Vancouver, Canada with his family.