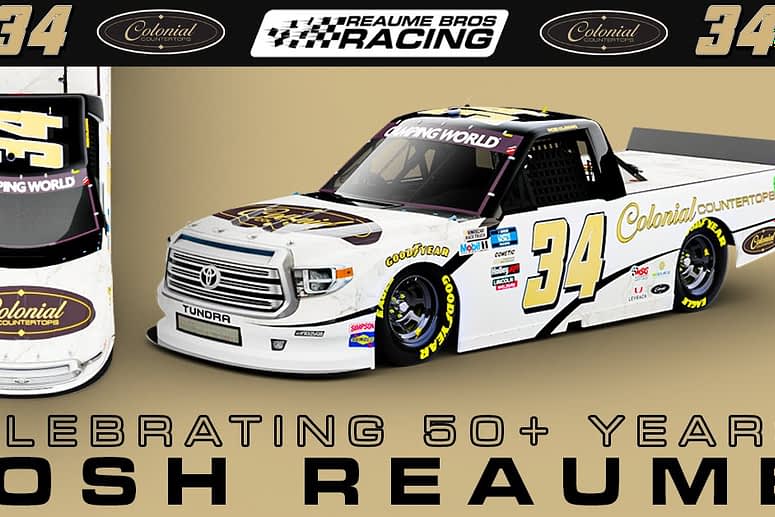 Reaume Brothers Racing is pleased to announce that team-owner Josh Reaume will pilot the #34 Toyota Tundra this upcoming weekend at Darlington. Reaume will take the track with backing from Colonial Countertops. A special paint scheme will be run to commemorate Colonial’s 50+ years in business.

“Colonial Countertops has been a long standing partner of mine and I am so unbelievably grateful for their continued support” says Reaume, who has had backing from Colonial for over a decade. “They offer a great service over there and are some of the best people in the business. Not to mention, now owning my own. team, I can appreciate all the effort that goes into growing a business, and Colonial has done it better than anybody”.

Reaume is rapidly approaching his 100th national series NASCAR start. He has one previous truck series start at Darlington; last season where he brought home his memorable Colonial Countertops Rusty Wallace throwback truck home 28th. Reaume, who’s immediate family resides in Victoria, British Colombia (Canada) and having graduated both high school and university there as well, loves the fact that he is representing a place that acted as home for him for a number of years.

“For Colonial to be from Victoria where 90% of my family still resides is awesome. Victoria still feels like a home to me in may ways so to have a local Victoria company on the big stage over here in the U.S. is an honor”.

Reaume will also have associate backing from sponsors Levrack, MSG, and Resource Material Handling, another set of sponsors who have been backing Josh and RBR for some time now. The green flag at Darlington will drop at 1:30 P.M. on Sunday, September 5th, with all the action live on FS1.

Marketing opportunities are still available to be a part of the most diverse team in NASCAR! If interested in becoming a part of the Reaume Brother’s Racing family, please contact Amir Alexander at amir@reaumebrothersracing.com.