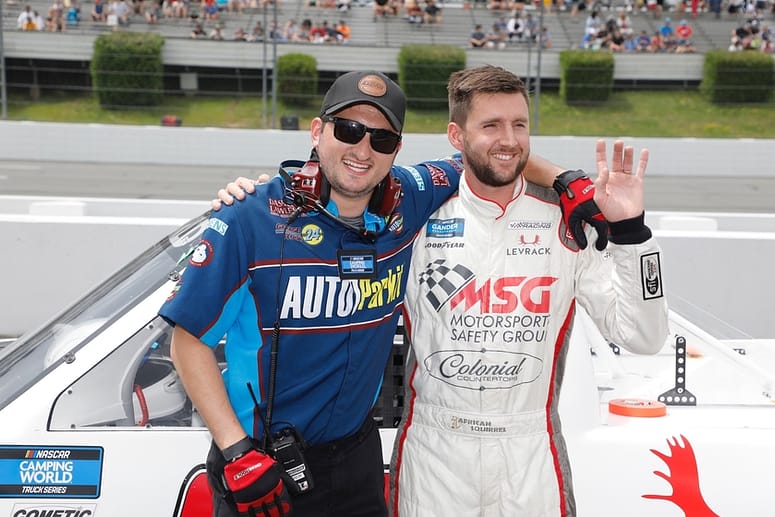 MOORESVILLE, NC – Reaume Brothers Racing is excited to announce that RBR Development Driver and former employee Stephen Mallozzi will make his NASCAR Camping World Truck Series debut at Mid-Ohio Sports Car Course on July 9th. The Woolwich Township, New Jersey native has had a successful career in go karting, the pinnacle of which being the 2017 Senior Rotax National Championship runner up, and earning a spot as a Team USA Rotax Karting Representative the same year. Along with karting experience, Mallozzi became the inaugural driver in the Reaume Brothers Racing Driver Development Program in 2021, gaining experience in full bodied stock cars and learning the craft of oval racing.

Mallozzi has been determined to find a way to make a NASCAR National Series start ever since his fathers terminal lung cancer diagnosis forced him out of kart racing. As a first generation driver, Stephen Mallozzi is elated about the opportunity given to him at Mid-Ohio.

“You know, breaking into motorsports in general is impossible, and I am so grateful for people in racing like Josh who continuously give drivers opportunities” said Mallozzi.

“For me, I’ve been pushing so hard to make this happen for my dad. He has his own impossible fight after being given just six months to live; and since that initial diagnosis he’s been going for almost six years. My old man has been my inspiration to keep going and try so hard to make this happen. He gave so much so I could race, and now it’s my turn to make him proud”.

Josh Reaume, owner of Reaume Brothers Racing, knows the nature of go karting, along with the toughness gained in that style of racing, and is confident that Mallozzi’s experience in road course style racing can produce a positive result for not only Mallozzi himself, but the entire team. Not only does he know karting, but over the summer spent working at RBR, Reaume came to know Mallozzi as well.

““Growing up in karting and wanting to be a race car driver, your dad is very much your best friend, driver coach, agent, and sponsor. To be able to help Malozz achieve this goal in light of the circumstances will most likely be the highlight of my year. Mid Ohio will be a weekend in which I will be so proud to be Stephen’s owner.”

Watch Stephen Mallozzi in the No. 43 Toyota Tundra TRD during the O’Reilly Auto Parts 150 at Mid-Ohio, Saturday July 9th at 1:30 PM EST on Fox Sports 1.

Reaume Brothers Racing began in 1997 when brothers, Jonathan and Joshua, started racing in competitive kart racing. From the humblest of beginnings to the NASCAR Xfinity/Camping World Truck Series, Reaume brothers have been chasing the racing dream, competing in events all around the world. 2022 will mark Josh and the team’s fourth full season in the Camping World Truck Series, fielding the #33 and #43 trucks, and is proud to be the most diverse team in all of NASCAR’s three National touring series. Reaume Brothers Racing is dedicated to providing unparalleled excellence and quality to our drivers, our partners and our team members, by setting an elite standard of greatness and by executing our team’s core values. Driven with passion and fueled with engineering, Reaume Brothers Racing is continuing to make a difference in NASCAR.

Josh Reaume was born in Redlands, California. He grew up in Nigeria for 13 years participating in humanitarian aid before moving to Vancouver, Canada with his family.