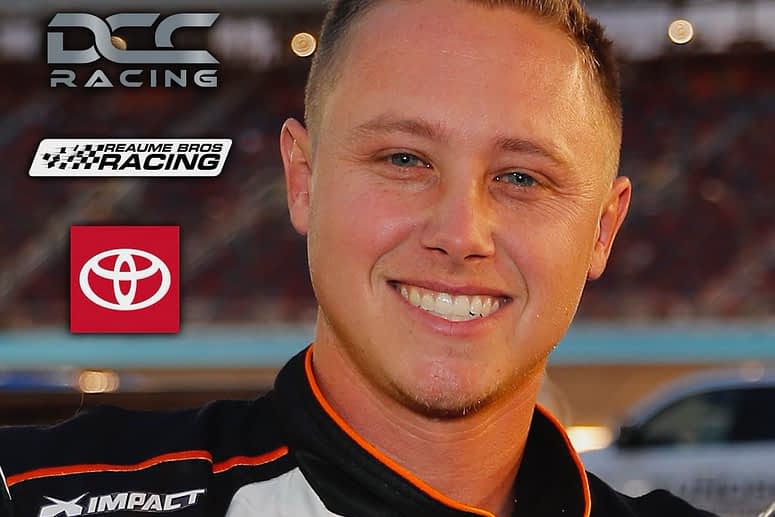 Veteran spotter Keith Barnwell will guide Lupton from high above.

Friday’s announcement from Reaume Brothers Racing and DCC Racing caps off a string of announcements for Lupton who will return to the Truck Series tour next weekend at Darlington (S.C.) Raceway with Kyle Busch Motorsports, as well as run a limited schedule with Sam Hunt Racing in the NASCAR Xfinity Series.

Lupton says he is ready for the challenge.

“It’s been a big week for me, but I can’t thank Josh and Brad enough for the opportunity to drive the No. 34 Toyota Tundra for the final four Truck Series races of the season,” he said.

“We have worked very hard over the last eight weeks to make sure we are in a position to put a competitive truck on the track with the goal of elevating Reaume Brothers Racing performance too. I’m excited to work with Frankie (Kerr), who I’ve known a little since competing in the Truck Series over the past couple of years.

“It is going to be a very busy two and a half months or so, but I’m ready to get to work and do a great job not only for Josh and Brad, but Kyle Busch Motorsports and Sam Hunt Racing too.”

Lupton has recorded one top-five and four top-10 finishes across 11 career NASCAR Camping World Truck Series starts. Lupton posted a career-best fifth-place finish in the Truck Series race at Kentucky Speedway in Sparta in 2019. Additionally, he has made four NASCAR Cup Series starts and 35 starts in the NASCAR Xfinity Series.

The Californian finished second in the ARCA Menards Series West event at Sonoma (Calif.) Raceway earlier this year. Across 33 career West Series starts since 2011, he has registered two wins, 14 top-five, 27 top-10 finishes and finished runner-up in the series’ championship standings in 2014.

“We have been working on this opportunity with Dylan for a couple of months and have acquired specific equipment for his races. The input from Brad as well as Frankie has the chance to propel Reaume Brothers Racing to another level in the NASCAR Camping World Truck Series is something we are all excited about.”

Means who has a relationship with Lupton from his Truck Series tenure at David Gilliland Racing is thrilled to work with him in a much larger capacity.

“I am focused on owning my own team in the NASCAR Camping World Truck Series in the future, but this is a great building opportunity for DCC Racing with Dylan Lupton,” added Means.

“I am excited to get to work with Dylan again especially in a situation that allows me to have a great influence on vehicles. Josh has worked really hard to grow and improve his program, but with this collaborative effort it’s an even better opportunity for Dylan, Josh and I to really prove ourselves. I think we are going to surprise a lot of people.”

While sponsorship for Lupton’s efforts will be announced at a later date, Aggressive Hydraulics will serve as a major associate marketing partner for the four-race program.

Reaume Brothers Racing (RBR) began in 1997 when John Reaume got his sons Jonathan and Joshua into competitive kart racing.  From these humble beginnings, the brothers have chased the racing dream, competing in events all around the world, studying mechanical engineering at university, and building a successful racing business specializing in karting and oval track racing.

In 2021, the team will continue its presence in the NASCAR Camping World Truck Series, while also planning to expand its focus to the NASCAR Xfinity Series.