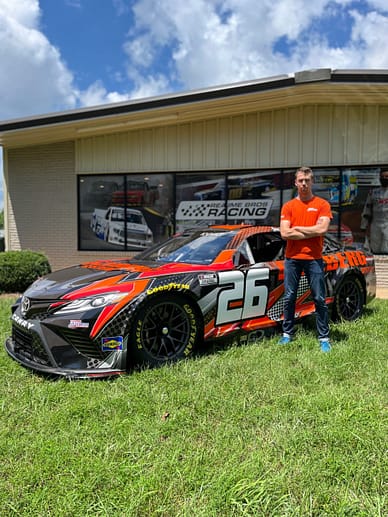 MOORESVILLE, NC: Team Hezeberg is proud to announce that former Formula One driver Daniil Kvyat will make his debut in the NASCAR Cup Series at the Indianapolis Motor Speedway Road Course. Kvyat has shown success behind the wheel from the start of his career, winning his first ever professional race in 2005. After consistently showing strong results, Daniil Kvyat and his family moved to Italy to further pursue his career. At the start of the 2013 season, Daniil Kvyat made his debut in the GP3 Series, scoring three wins and five total podiums and ultimately winning the championship in 2013.

After winning the 2013 GP3 Championship, Daniil Kvyat debuted in Formula One for Toro Rosso at the start of the 2014 season, at just 19 years old. At the 2014 Australian Grand Prix, Kvyat finished 9th in the race, setting the record as the youngest points-scorer in Formula One, a record formerly held by Sebastian Vettel. Following a successful 2014 season, Daniil Kvyat was promoted to Red Bull Racing for the 2015 season. His first podium came at the 2015 Hungarian Grand Prix, becoming the second youngest driver to claim a podium finish at 21 years old. Kvyat continued in the Red Bull driver program until 2020, finishing his Formula One career at Alpine as a reserve driver in 2021.

Daniil Kvyat is no stranger to adversity. As a worldwide talent in motorsport, the one thing that Kvyat has shown interest in is NASCAR. The opportunity to come to the NASCAR Cup Series could not have come at a better time. “I’m very happy to be able to make my NASCAR Cup Series debut at Indianapolis. I have always been passionate about racing in NASCAR, the top form of motorsport in the United States. NASCAR has always been intriguing to me, as it is a pure form of motorsport to me.”

Daniil Kvyat’s debut in the NASCAR Cup Series comes after a hiatus from being behind the wheel, but Kvyat is optimistic about his return to the top levels of motorsport. “I’m looking forward to being successful in this form of motorsport and I hope to contend for wins and championships in the future. I can’t thank NASCAR, Josh Reaume, Toine Hezemans, Ernst Berg, and everybody at Team Hezeberg enough for the opportunity. The guys at the shop have been working tirelessly to prepare machine and myself for this experience. It will be my first time at Indianapolis, and I am looking forward to seeing it in person. From what I have seen on video, Indianapolis is a challenging circuit, but I’m looking forward to that challenge, along with competing in the NASCAR Cup Series.”

Josh Reaume, Co-owner of Team Hezeberg, is excited about having a worldwide talent behind the wheel, and is positive about the Next-Gen’s capabilities at Indianapolis. “Daniil is a very talented driver with an amazing amount of open wheel experience. In my opinion, NASCAR is a great spot for Daniil to end up at, especially with the Next-Gen’s capabilities throughout many styles of racing. I’m looking forward to being a part of Daniil’s transition to NASCAR, and helping him however I possibly can.”

Watch Daniil Kvyat in the No. 26 Toyota Camry TRD during the Verizon 200 at the Indianapolis Motor Speedway Road Course, Sunday July 31st at 2:30 PM EST on NBC.

Founded in 2021, Team Hezeberg Powered by Reaume Brothers Racing fields the Number 26 and Number 27 in the NASCAR Cup Series. With backing from former Dutch prototype racer Toine Hezemans and Dutch entrepreneur Ernst Berg, Team Hezeberg gives drivers from across the world the opportunity to compete in the highest form of American Motorsport. Reaume Brothers Racing is becoming a standout for their vast array of drivers making their way to NASCAR, from very little experience to a lifetime of experience. With support from Reaume Brothers Racing, years of motorsport knowledge collide to create the ultimate experience for worldwide talent in NASCAR.

Follow Team Hezeberg on all our social media platforms: