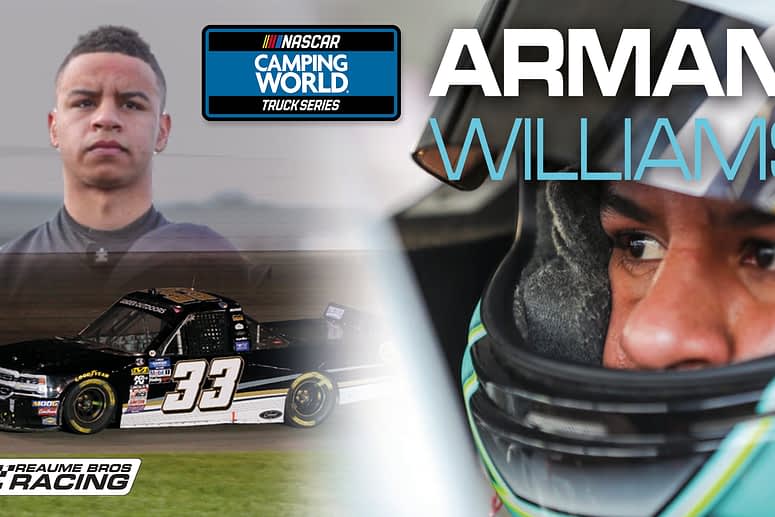 Reaume Brothers Racing is proud to announce Armani Williams will pilot the #33 truck at Gateway. Williams is NASCAR’s first driver to be diagnosed on the autism spectrum. He has two prior NASCAR ARCA Menard’s Series Starts, both run for Andy Hillenberg last season. He placed 17th in his debut, and improved in his second start to bring his ride home 10th at Michigan later in the year.

“I have been talking to Armani and his dad Del about this for quite some time now” says Josh Reaume, owner of Reaume Brothers Racing. “No one really understands how much they have overcome and how hard they have worked in order to secure these opportunities. They’ve grown numerous partnerships and spent tons of time developing Armani’s career, so it’s nice to see these efforts finally paying off. I am so happy to be able to help and get such a great kid behind the wheel”.

Armani has loved racing since he was playing with Hot Wheels as a little boy. He ended up discovering NASCAR, and he has not looked back. When he was just eight years old, he started racing go-karts. Williams quickly progressed to Bandaleros, then to the ARCA Truck Pro Series, and even ran five races in Canada in the NASCAR Pinty’s Series. From there he went to ARCA, and now, he looks towards his first ever truck start.

“This is a dream come true having the opportunity to make my debut in the NASCAR Camping World Truck Series at Gateway. When I got the call from my dad, I was overcome with emotion. Many years of hard work, along with the support of my family, friends, and fans have made this possible. And of course, I have to thank Reaume Brothers Racing for believing in me and giving me this incredible opportunity”.

Armani’s father, Del, has been by Armani’s side since day one, supporting Armani’s climb up the racing latter. Del didn’t know a whole lot about autism was when his son was diagnosed at just two years old. However, he and Armani’s mother Irena have stood by Armani throughout his racing journey, and given him all the love and support two parents could possibly give.

“As a dad, all you want is for your kids to be afforded all the opportunities to chase their dreams. Racing is already a tough enough sport as it is; between having to find funding, knowing the right people, and just having enough talent” Del says. “Meeting Josh, has given us the opportunity and platform to seek funding to get this done. It is just such a challenge in the sport today. When you throw in the challenges of being on the autism spectrum, saying we had an uphill battle was an understatement. It makes me emotional to see how much (Armani) has grown over the past 20 years”.

Marketing opportunities are still available for this monumental moment in NASCAR history! If interested in hopping on board for this trailblazer moment, please contact Amir Alexander at amir@reaumebrothersracing.com. The green flag for Williams’ debut drops at 9:00 P.M. on Friday, August 20th. All the action will be live on FS1.